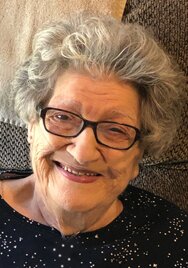 Mary C. Slaughter, age 88, of Shinnston, WV, died Monday, September 5, 2022, at the home of her daughter in Shinnston. She was born December 20, 1933, in Daysville, WV, a daughter of the late Joseph and Anna DeFrancesco Derico. On September 15, 1950, she married Jerel D. “Jerry” Slaughter who preceded her in death on June 12, 2013. In addition to her parents, and husband she was preceded in death by one infant daughter, Faith Darlene Slaughter; two sisters, Edna Coughlin and Theresa Henline and six brothers, Guy, Bill, Raymond, Angelo, Lebro and Leonard Derico.  She is survived by her children, Patty Miller and husband David of Shinnston, Jerl D. Slaughter, Jr., of Pursglove, WV, Rosalie Boyles and husband Charles “Willy” of Winfield, WV and Robert Slaughter and wife Debbie of Shinnston; five grandchildren, David Miller, II and husband Dave of San Diego, CA, Shelly Smith of Westover, WV, Mandy Warden and husband Richard of Hurricane, WV, Robert “Bobby” Slaughter, II of Greensburg, PA and Amber Penland and husband Jonathan of Grafton, WV; nine great-grandchildren, Brittany Minor and companion Robert Blair of Bonnaire, GA, Jarod Miller and fiancé, Abril Arrezola of Camp Lejeune, NC, Kaelyn Miller of Nashville, TN, Sonny Smith of Westover, Robert “Bobby” Slaughter, III of Fairmont, WV; Joey Smith of Westover, Ethan, Nathan and Holden Penland all of Grafton, WV; several nieces and nephews and two sisters-in-law, Bernice and Helen Derico both of OH. Mrs. Slaughter was a homemaker and a member of the St. Ann’s Catholic Church in Shinnston where she sang in the church choir. She was a member of Sapps Hollow Band, and enjoyed painting, crocheting and was a wonderful cook. Friends will be received Thursday, September 8, 2022, from 4 to 8 PM at the Poling- St. Clair Funeral Home. A funeral service will be held 11 AM Friday at the funeral home with Father Edward Tetteh as celebrant. Burial will follow in the Sand Run Baptist Cemetery in Excelsior, WV. In lieu of flowers donations may be made to the Alzheimer Association or St. Jude’s Children Research Hospital.  Online condolences may be me to the family at www.polingstclair.com. Poling-St. Clair Funeral Home is in charge of the arrangements.