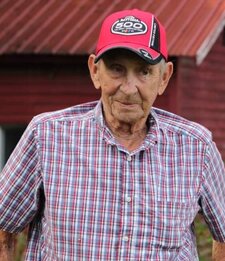 Please share a memory of Kyle to include in a keepsake book for family and friends.
View Tribute Book

Kyle Lee Helmick, age 81, of Atlas (Brushy Fork Community), WV, went to meet Jesus on Tuesday, May 10, 2022, surrounded by his loving family at his home following a brief illness.  Kyle was born on July 23, 1940, in Hinkleville, WV to the late John Carl and Regina Nellie (Raikes) Helmick. Kyle is survived by his loving and devoted wife, Ruby Lorene (Williams) Helmick whom he married on July 3, 1965, after a six-month courtship.  Kyle and Ruby enjoyed 56 years of marriage. He is survived by his two daughters of whom he was very proud, Janet Lorene Phillips and husband, Brad of Buckhannon and Patsy Lynell Turner and husband, Tim of Elkins.  Kyle loved his grandchildren, Luke Rager and companion Eleni Mullins of Buckhannon, Lance Rager of Martinsburg, WV, and Sarah Rager and boyfriend, Michael Dague of West Liberty, WV, Tiffanie Robinson of Kannapolis, NC, and Natasha Zirkle and fiancé Clark Evans of Elkins, WV. Great grandchildren include Liam, Baler, and Sawyer Zirkle of Elkins, WV and Remington and Bristol Shillingburg of Kannapolis, NC. Kyle is survived by two brothers, Eugene and wife Lucille and Bobby and wife Patty and two sisters, Mona Helmick and Peggy Ball and friend Don Miller, all of Buckhannon, WV.  Sister in laws, Karen Helmick and Gloria Helmick of Buckhannon, WV, Genevieve Moats of Hacker Valley, WV, and Debbie Helmick of Morgantown, WV also survive Kyle. A special Uncle Hoy Junior Raikes, of Texas survives.  Also, brother and sister-in-law Carl and Sue Williams have been with Kyle daily during his illness.  He loved all his brother and sister in laws: Archie & Lynn, Cecil and Hazel, Frankie and Joan, Francis and Jack and saw them as siblings and not in-laws. Kyle is also survived by several nieces, nephews, great nieces, and great nephews who loved their Uncle Kyle and were at his bedside during his last weeks at home. Kyle is also survived by his cat, Sunshine, and his grand dogs, Sharky and Bristol of Buckhannon, WV, and Remington and Pepper of Elkins, WV. He was preceded in death by brothers, Jack, Lyelle, Jim, Larry, John, and Steve and sister in laws, Winnie Queen, Vada Helmick and Betty Helmick and some nieces and nephews.  He was also preceded in death by his canine sidekick, Boomer. Kyle, who was also known as Spud and Mountaineer, was a truck driver most of his life including for Reidbord Brothers and SW Jack Drilling.  Kyle enjoyed woodworking and was co-owner of Atlas Lumber Company for several years.  Kyle retired from SW Jack Drilling in 1997 after 9 years of service.  Upon retirement, Kyle continued working as a gopher for Ruby’s Corner and loving babysitter for his grandchildren. Kyle was a graduate of Buckhannon-Upshur High School class of 1959. Kyle was a proud US Veteran having served in the US Army from 1962 – 1965.  In his words, he joined the Army to travel the world and made it to Fort Benning, Georgia. In addition to spending time with his loving family, Kyle had many interests including woodworking, family genealogy, history, camping at his Holly Grove camp, computers, and watching FOX news. He was a Pittsburgh Steelers fan and enjoyed watching NASCAR races. Kyle was known by his family as a walking roadmap – mention an obscure town or road and he knew where it was, how to get there, and oil wells that were drilled in the area. Kyle visited Buckhannon Stockyards most Wednesdays and loved going out to eat with family on Friday evenings for his ribeye steak.  He never met a stranger and loved to laugh and joke with everyone, especially waitresses and his nurses. Kyle loved his doctors and nurses at Stonewall Jackson Memorial Hospital and WV Hospice staff.  Not only did he laugh and joke with them but would tell them he still loved them when they would do something he really didn’t want to happen.  Kyle was never a fan of doctors, but he thought Dr. Greg Peters and Pam Smallridge were the best.  Megan Rumney of WV Hospice has been a special support to Kyle. The family is very appreciative of the care they all provided. Kyle was a Christian by faith and attended Reger Chapel United Methodist Church.  He was proud to say he was baptized and ready to meet Jesus and loved listening to gospel music. Friends will be received Friday, May 13, 2022 from 4 PM to 8 PM at the Poling-St. Clair Funeral Home. A funeral service will be held 11 AM Saturday at the funeral home with lay speaker, Mike Hinkle officiating. Burial will follow in the Reger Chapel Cemetery. The Upshur County Honor Guard will perform military honors at the gravesite. Online condolences may be made to the family at www.polingstclair.com. Poling-St. Clair Funeral Home is in charge of the arrangements.

Share Your Memory of
Kyle
Upload Your Memory View All Memories
Be the first to upload a memory!
Share A Memory
Plant a Tree