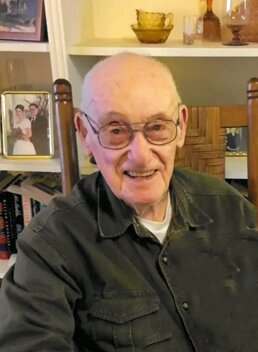 Please share a memory of Willis to include in a keepsake book for family and friends.
View Tribute Book

Willis Darius Craven, age 101, of Tallmansville, WV, died Thursday, April 14, 2022, at Mountain Memories in Elkins, WV. He was born December 6, 1920, in Tallmansville, a son of the late Cecil Ralph and Eula Fern Tenney Craven. In addition to his parents, he was preceded in death by his wife, Laura Jean Thompson Craven; one daughter, Melanie Craven; one sister, Norma Tomley-Avery and son-in-law, Donald G. Shipman. He is survived by three daughters, Linda Mathias and husband David of Elkins, Diane Shipman of Hewitt, TX, and Barbara Kerns and husband Carroll of Buckhannon, WV; three grandchildren, Amy Arthur and husband Jay of Morgantown, WV, Isaac Shipman of Hewitt, and Samantha Shipman of Pasadena, CA; three great-grandchildren, Ryan, Carly, and Kadie Arthur, all of Morgantown.  Mr. Craven was a BUHS graduate in 1936 at the age of 15. He started attending WVWC at the age of 16 and earned his teaching certificate. He earned his Bachelor of Arts degree from WVWC in 1947 and his Master of Arts degree from WVU in 1949. He also studied at Shrivenham University in England and the University of Colorado after WWII. Mr. Craven served in the US Army Infantry for 40 months from 1941 to 1945 in WWII. He served with a unit that landed on Utah Beach, France in 1944 and continued for nine months in front-line duty. He was awarded four battle stars: ETO Ribbon, Victory Medal, Good Conduct Medal, and Bronze Star Medal. After the war, he established a successful mercantile business with his parents in Tallmansville. Mr. Craven and his parents operated this thriving business for decades before closing in 1978. Mr. Craven was a teacher and a principal for many years. He taught at Zickefoose School, Sand Run, Tallmansville, Ten Mile, and Central Grade School. He was also the first principal at Washington District Elementary School. He served as the County Superintendent of Schools in 1957-1958. Mr. Craven retired in June 1986 with 43 years’ service. Mr. Craven served as chairman of the County Republican executive committee from 1956 to 1958. He was elected to the House of Delegates in 1958 for one term. He was a member of the Knights of Pythias, VFW, Elks, Buckhannon Moose Lodge, and the Retired Teachers Association. The family would like to thank the staff at Mountain Memories for their care of Mr. Craven during his time there. Friends will be received Wednesday, April 20, 2022, from 11 AM until 1 PM at the Poling-St. Clair Funeral Home. A funeral service will be held at 1 PM Wednesday at the funeral home with Pastor J. Edward McDaniels officiating. Burial will follow in the Mt. Carmel Cemetery in Tallmansville, WV. The Upshur County Honor Guard will conduct Military Honors at the Graveside. Online condolences may be made to the family at www.polingstclair.com. Poling-St. Clair Funeral Home is in charge of the arrangements.

Share Your Memory of
Willis
Upload Your Memory View All Memories
Be the first to upload a memory!
Share A Memory
Plant a Tree