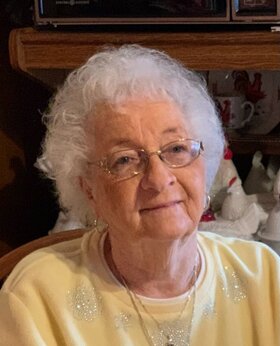 Please share a memory of Ima to include in a keepsake book for family and friends.
View Tribute Book

Ima Jean Ratliff Goodwin, age 85, of Buckhannon, WV, passed away Friday, January 13, 2023, at the WV Caring Hospice Center in Elkins, WV. She was born March 20, 1937, in Buckhannon, a daughter of the late Hughart Jake and Zenna Fidler Ratliff. On June 5, 1955, she married Carl Lee Goodwin, Sr., who preceded her in death on December 19, 2002. In addition to her parents and husband, she was preceded in death by two sisters, twin sister Emma Jean Cross and Kate Ricottilli; two brothers, Billy and Jimmie Ratliff; sister-in-law, Margaret Ratliff and one brother-in-law, Armand Ricottilli. Surviving are four sons, Carl Lee Goodwin, Jr. and wife Mary Johnston of Buckhannon, Charles Neal Goodwin and Glen Kirk of Parkersburg, WV, Douglas A. Goodwin and wife Lou Ellen Gaston of Morgantown, WV and Kevin M. Goodwin of Buckhannon; two grandson, Christopher S. Goodwin and wife Chrysan Miller Buckhannon and Bradley L. Goodwin and wife Ivy Shaver of Morgantown; one granddaughter, Natasha E. Goodwin of Morgantown; one great grandson, Miles Goodwin of Buckhannon; two sisters-in-law, Anna Dell Ratliff and Marjorie Chewning and husband Arnold all of Buckhannon; one brother-in-law, Sherman Goodwin and wife Connie of Stonewood, WV and several nieces and nephews. Mrs. Goodwin was a homemaker, a member of the Sand Run Baptist Church, a member of the Heavner Grove CEOS and a Cub Scout Den Mother. She was a devoted primary caregiver to her son Kevin, who has Multiple Sclerosis, for several years. Mrs. Goodwin enjoyed spending time with family, gospel music, western movies, gardening, yard sales, collecting glass baskets and hens on nest, picnics and cookouts. Friends will be received Wednesday, January 18, 2023, from 11 AM to 1 PM at the Poling-St. Clair Funeral Home. A funeral service will be held 1 PM Wednesday at the funeral home with Pastor Greg Miller officiating. Burial will follow in the Buckhannon Memorial Park. In lieu of flowers, contributions may be made to the Sand Run Baptist Church Cemetery Fund 2272 Vegan Rd. Buckhannon, WV 26201. Online condolences may be made to the family at www.polingstclair.com. Poling-St. Clair Funeral Home is in charge of the arrangements.

Share Your Memory of
Ima
Upload Your Memory View All Memories
Be the first to upload a memory!
Share A Memory
Plant a Tree