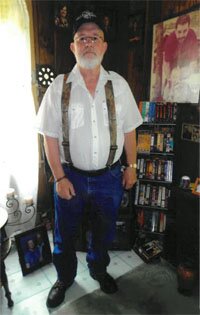 Robert W. Black, age 78, of French Creek, WV, died Wednesday, December 14, 2022, at WVU Medicine St. Joseph’s Hospital in Buckhannon, WV. He was born October 28, 1944, in Upshur County, WV, a son of the late Merideth Ray and Daisy Lea Anglin Black. On June 18, 1966, he married Faye Burr who survives. Also surviving are two sons, Lawrence Burr of Crawford, WV and Samuel Lee Black of Buckhannon; three grandsons, Christopher Burr and wife Kayla of French Creek, Cody Burr of Crawford and Joshua Black of Buckhannon; one granddaughter, Clarissa Burr of Crawford; six great-grandsons, Damian Burr of Braxton County, WV, Keenan, Hunter and Liam Burr all of French Creek, Elijah Black of OH and Noah Burr of Buckhannon; two great-granddaughters, Jersey and Shikia Burr both of Weston, WV; two sisters, Karen Sue Byrd and Joyce Faye Powers and husband Benton all of Buckhannon; two brothers, Ricky Ray Black and wife Melba and David Michael Black and wife Lori all of Buckhannon and several nieces and nephews. In addition to his parents, he was preceded in death by one son, Robert W. Black, Jr. and one sister, Brenda Lucille Black. Mr. Black worked for Moore Business Forms in the Printing Press Department. He loved his grandchildren, to be with his family and hunting. Friends will be received Sunday, December 18, 2022, from 4 PM to 8 PM at the Poling-St. Clair Funeral Home. A funeral service will be held 11 AM Monday at the funeral home with the Rev. Wease L. Day officiating. Burial will follow in the Mt. Carmel Cemetery in Tallmansville, WV. Online condolences may be made to the family at www.polingstclair.com. Poling-St. Clair Funeral Home is in charge of the arrangements.