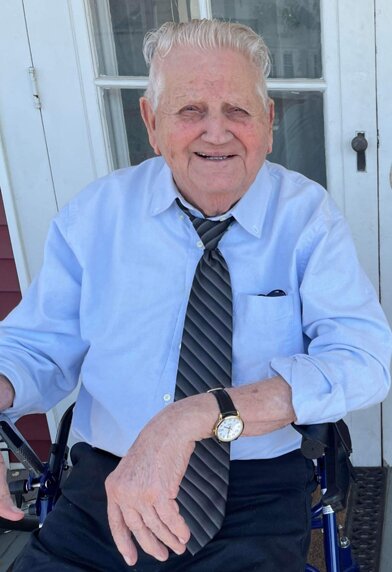 Please share a memory of Laco to include in a keepsake book for family and friends.
View Tribute Book

Laco D. Harrison, age 94, of Rock Cave, WV died Saturday, November 26, 2022, at St. Joseph’s Hospital in Buckhannon, WV. He was born September 13, 1928, in Cleveland, WV, a son of the late Perry B. and Arlie Shaver Harrison. On December 23, 1956, he married Janice Lacks who preceded him in death on October 29, 2007. In addition to his parents and wife, he was preceded in death by his son, Kelly Harrison; sisters, Juanita, Edna, Dexter, Mae and Maxine and brothers, Bill, Burkeley, Paul and Jerry. He is survived by three daughters, Terry Chapman and husband Don of Fairmont, WV,  Susan Dumas and Nial Carpenter of Hemlock, WV and Diane Alderman and husband Jim of Crawford, WV; daughter-in-law, Karen Harrison of Columbus, OH; ten grandchildren; twenty-seven great-grandchildren; three great-great grandchildren and brother, Calvin “Mick” Harrison and wife Brenda of Volga, WV. Mr. Harrison served in the U. S. Army. He was a welder and a member of The Church of Jesus Christ of Latter-Day Saints. He was a checkers champion and loved woodworking, building quilting frames, and playing scrabble. He was also musically talented and enjoyed playing all instruments, except the banjo. Friends will be received Thursday, December 1, 2022, from 4 PM to 7 PM at The Church of Jesus Christ of Latter-Day Saints. A funeral service will be held Friday 11 AM at the church with Bishop Kevin Conde officiating. Burial will follow in the Upshur County Memorial Park in Tennerton, WV. The Upshur County Honor Guard will perform military honors at the graveside. Online condolences may be made to the family at www.polingstclair.com. Poling-St. Clair Funeral Home is in charge of the arrangements.

Share Your Memory of
Laco
Upload Your Memory View All Memories
Be the first to upload a memory!
Share A Memory
Plant a Tree