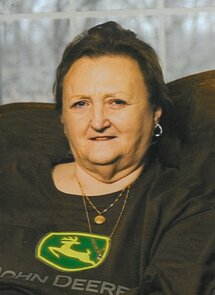 Donna Sue Currence, age 74, of Buckhannon, WV, died Tuesday, August 2, 2022, at the St. Joseph’s Hospital in Buckhannon. She was born November 14, 1947, in Buckhannon, a daughter of the late Hoy and Goldie Light Tenney. On March 17, 1967, she married Wilson Doug Currence who survives. Also surviving are one daughter, Kristi Dill and husband Steven of Murrells Inlet, SC; one son, Wilson D. Currence, Jr. and wife Carol of Shreve, OH; one granddaughter, Kaitlyn Reusser and husband Aaron of Big Prairie, OH and two grandsons, Caleb Currence of Shreve and Lance Dill of Murrells Inlet. In addition to her parents, she was preceded in death by four sisters, Eldora Simons, Juanita Barb, Lois Dunn and Bonnie Elvin and two brothers, Denver Tenney and Eddie Light. Mrs. Currence was a homemaker and loved to bake. Over the years she baked many wedding cakes. Friends will be received Monday, August 8, 2022, from 5 to 7 PM at the Poling-St. Clair Funeral Home. A funeral service will follow at 7 PM at the funeral home with Pastor Holly Hoover officiating. A private family graveside service will be held at a later date. Online condolences may be made to the family at www.polingstclair.com. Poling-St. Clair Funeral Home is in charge of the arrangements.

Share Your Memory of
Donna
Upload Your Memory View All Memories
Be the first to upload a memory!
Share A Memory
Plant a Tree