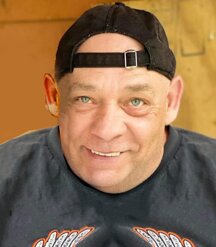 Please share a memory of Randell to include in a keepsake book for family and friends.
View Tribute Book

Randell “Randy” D. Burr, age 61, of Volga, WV, died Friday, July 29, 2022, at his home. He was born January 26, 1961, in Buckhannon, WV, a son of the late Junior E. and Reta Smith Burr. On April 30, 1994, he married Tracie Garrett who survives. Also surviving are daughter, Bobbie Jo and husband Jeremiah and their children, Kody, Parker, Allyssa and Kaden; daughter, Christina Brady and her children, Traka, Cameron and Jayron and grandchildren, Vera, Creedence and Bubba; daughter Tonya and husband Bradly and their children, Dougie and Megyn; daughter, Erica and husband Mark and their children, Hunter, Henry, Hannah, Levi and Travis; daughter, Rachel Mollohan and husband Cody and their children, Melissa, Ford, Tristan, Summer and Devlon; son, David and wife Breanna and their children, Brooklyn and Tyson; daughter, Crissy and partner Dustin and their child, Corbin; brothers and sisters, Monnie Burr, Vaughn Burr and late wife Mary, Wayne Crites and wife Diana, Carol Potts and husband Christopher and Marilyn Lancaster and husband Gene; special pet, Misty and several nieces and nephews. In addition to his parents, he was preceded in death by one brother, Allen Crites and sister-in-law, Mary Burr. Randy was a car enthusiast, enjoyed motorcycles, hunting, fishing and spending time with his family. Friends will be received Thursday, August 4, 2022, from 4 to 6 PM at the Poling-St. Clair Funeral Home. In honoring his wishes, Mr. Burr will be cremated after the viewing. In lieu of flowers the family requests that any contributions be made to the funeral home to help with funeral expenses. Online condolences may be made to the family at www.polingstclair.com. Poling-St. Clair Funeral Home is in charge of the arrangements.

Share Your Memory of
Randell
Upload Your Memory View All Memories
Be the first to upload a memory!
Share A Memory
Plant a Tree