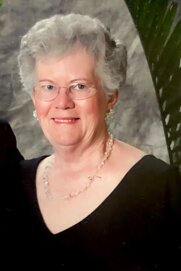 Please share a memory of Diana to include in a keepsake book for family and friends.
View Tribute Book

Diana Beth Darnall Steed, age 83, of Buckhannon, WV, died Thursday, July 21, 2022, in her home. She was born October 25, 1938, in Albuquerque, NM, a daughter of the late Robert Bruce and Vera Taylor Darnall. On June 16, 1960, she married Gerald (Jerry) Vernon Steed who preceded her in death on December 5, 2019. In addition to her parents and husband she was preceded in death by two brothers, William and Robert Darnall. Surviving are four children, Bradley Steed and wife Amber of Anderson, SC and their children Brooke Krulic, Kay Kellett and Patrick Griffey; Tara Steed of Morgantown, WV and her children Meredith and Leah Marsh; Megan Fay and husband Don of Warrenton, VA and their children Colin and Erin; and Derek Steed and Katherine Carter of Burlington, NC and their children Ryan Steed, Michael Steed, James Steed, Grace Santos, and Harriet Santos. Diana received her Bachelor of Arts in Education from the University of New Mexico in 1960. She taught French, English, and European History at Rio Grande High School. In 1974, the Steed family left Albuquerque and moved to the Darnall family home in Buckhannon. After enjoying being a full-time mother, she returned to her calling as a teacher, instructing in French and Social Studies at Buckhannon-Upshur Middle School for over 30 years. She received her Master of Education from West Virginia Wesleyan College. Diana was devoted to her community and was active as a 4-H Leader and in many local and state organizations including WV Professional Educators, Delta Kappa Gamma, and P.E.O. Chapter A. Her faith was her foundation. At the Episcopal Church of the Transfiguration she was an organist, Sunday School teacher, altar guild member, and vestry member. In all that she did, and to all whom she met, Diana was a teacher, a counselor, a compass, a haven.  Her actions will remain as a role model, and her words as a guide, for the countless people whose lives she touched. A memorial service will be held at the Church of the Transfiguration on August 6 at 4:00 p.m. preceded by visitation 2:00-4:00 in the church’s parish hall. In lieu of flowers donations may be made in her honor to the Episcopal Church of the Transfiguration or the St. Jude Children’s Research Hospital. Online condolences may be made to the family at www.polingstclair.com. Poling-St. Clair Funeral Home is in charge of the arrangements.

Share Your Memory of
Diana
Upload Your Memory View All Memories
Be the first to upload a memory!
Share A Memory
Plant a Tree