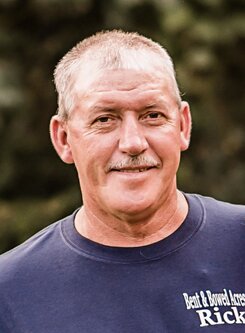 Please share a memory of Ricky to include in a keepsake book for family and friends.
View Tribute Book

Ricky Daniel Sipe, age 55, of Sago, WV, died Saturday, May 28, 2022, at his home with his family by his side. He was born October 27, 1966, in Ten Mile, WV, a son of the late Creed Wiford and Maguerite Lee Tenney Sipe. He was preceded in death by his wife, Brenda Lee Stutler who died on February 14, 2021. He is survived by two daughters, Nichole Lee Howes and husband Ethan Mark Howes of Sago, WV and Ashely Dawn Sipe of Tallmansville, WV; two sons, Daniel Wayne Sipe of Lincolnton, NC and Matthew Lee Sipe of Buckhannon; thee grandchildren, Waylon Mealey of Tallmansville and Ethan Mark Howes II and Leeah Mae Howes both of Sago; two brothers, Robert Wayne Sipe of Clarksburg, WV and Ray Sipe of Weston, WV; eight sisters, Carolyn Sue Sipe of Weston, Patty Landis of Buckhannon, Susan Coogle of Mannington, WV, Anita Madison and husband Clay of Statesville, NC, Judy Redding of Harmony, NC, Barbara Jones and husband Barry of York, SC, Dottie Gilbert and husband Tony of Union Grove, NC, Donna Sprouse of Weston and Betty Sipe and husband Mike Nuzum of Buckhannon; and special friends, Kalyn Roberts, Neil Miller, Lowell Smith, Brian Carpenter, Henry Hamner, James Hamner, and wife Patty and their children Snow, Madison and Wayne, and Pauline Budman all of Buckhannon, Hayseed of Lost Creek, WV, and Christine Edwards of Elkins, WV. In addition to his parents and wife, he was preceded in death by two brothers, Terry Sipe, and infant brother Dusty Sipe. Mr. Sipe loved his grandchildren with his whole heart. Ricky also held his special friends, dear to his heart. Ricky was the proud co-owner of Bent and Bowed Acres with his son-in-law Ethan, whom he handed off the reins to in light of his cancer diagnosis. Ricky enjoyed farming pigs and cattle and being with his grandbabies. In light of Ricky’s wishes, he would like to be cremated with no services to follow. Online condolences may be made to the family at www.polingstclair.com. Poling-St. Clair Funeral Home is in charge of the arrangements.

A Memorial Tree was planted for Ricky
We are deeply sorry for your loss ~ the staff at Poling - St. Clair Funeral Home & Crematory
Join in honoring their life - plant a memorial tree
Online Memory & Photo Sharing Event
Online Event
About this Event

Share Your Memory of
Ricky
Upload Your Memory View All Memories
Be the first to upload a memory!
Share A Memory
Plant a Tree