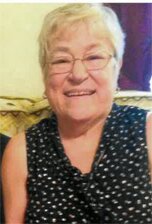 Please share a memory of Bonnie to include in a keepsake book for family and friends.
View Tribute Book

Bonnie K. Livingston, age 71, of Buckhannon, WV, died Tuesday, May 3, 2022, at her home. She was born September 29, 1950, in Buckhannon a daughter of the late Otis Clark and Terecia Bailey Rowan. On March 8, 1969, she married Charles Livingston who preceded her in death on November 29, 2016. In addition to her parents and husband she was preceded in death by her stepmother, Frances Mildred Rowan; daughter, Rebecca Livingston and sister, Vada Helmick. She is survived by one son, Charles Livingston and wife Martha of Wadsworth, OH; one daughter, Carrie Brady and husband Charles of Mogadore, OH; eight grandchildren, Tiara, Brian and wife Emma, Branden, Andrew, Charles, Emma, Rebecca and Matthew; four great-grandchildren, Troy, Faye, Mia and Nora; three brothers, Marvin Rowan, Bill Rowan and wife Margaret and Otis “June” Rowan and wife Bonnie all of Buckhannon. Mrs. Livingston was a homemaker who loved cooking and spending time with her children and grandchildren. She was a member of the Moose Lodge in Buckhannon, enjoyed bowling and was on a bowling league. Bonnie loved flowers, crossword puzzles, trains and NASCAR. Friends will be received Friday, May 6, 2022, from 11 AM to 1 PM at the Poling-St. Clair Funeral Home. A funeral service will be held at 1 PM at the funeral home with Rev. Eugene Helmick and Rev. Junior Harris officiating. Burial will follow in the Bailey Cemetery in Buckhannon. Online condolences may be made to the family at www.poingstclair.com. Poling-St. Clair Funeral Home is in charge of the arrangements.

Share Your Memory of
Bonnie
Upload Your Memory View All Memories
Be the first to upload a memory!
Share A Memory
Plant a Tree