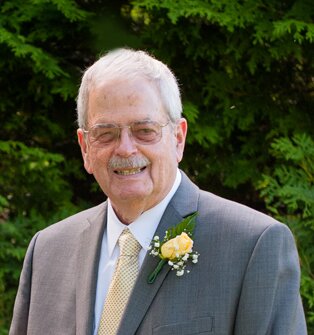 William Lee O’Brien of Buckhannon, WV, age 81, died Saturday, April 9, 2022. Bill was born May 20, 1940, in Buckhannon, the son of the late William Talbot and Esther Young O’Brien. On August 8, 1976, he married Doris Emmaline McHugh, who preceded him in death on June 2, 2011. In addition to his parents and wife, he was preceded in death by his sister, Jane O’Brien Ayers, and his cousin, William S. O’Brien. He is survived by his son, William J. “Jamie” O’Brien of Buckhannon; daughter, Emmalee O’Brien Mohan and husband Eric of Morgantown, WV; granddaughter, Elsie Lee Mohan of Morgantown; sister, Katy O’Brien Greenhill, and husband Kip, of Columbus, OH; brother-in-law Jim Ayers of Columbus, OH; cousin, Patricia O’Brien of New York, NY; two sisters-in-law, Jane Helmick and husband Charlie of Buckhannon and Diana Cruickshank and husband Jim of Paducah, KY and several nieces and nephews. Bill graduated from Buckhannon High School in 1958, received his Bachelor of Arts from Albion College in 1963, and received his Master of Arts from West Virginia University in 1977.  He taught high school history for over 40 years: at Caesar Rodney High School in Dover, Delaware; and over thirty years at Buckhannon-Upshur High School.  He and his wife, Dorie, opened The Island-Nursery Kindergarten in 1982, providing preschool and kindergarten instruction for students in Upshur County until the 2021-2022 school year. He was a life-long member of the First United Methodist Church of Buckhannon, where he chaired the Higher Education Scholarship Fund for years.  He served as Treasurer of the Buckhannon Lions Club and was a long-time board member of the Charles W. Gibson Public Library in Buckhannon. Bill enjoyed golfing, reading, gardening, walking, any kind of dessert, and good conversations with friends and family.  He particularly enjoyed hosting family events at his home, and will always be remembered for his dedication, kindness, and love.  Friends will be received Thursday, April 14, 2022, from 5 PM to 8 PM at the Poling-St. Clair Funeral Home. A funeral service will be held Friday at 11 AM with the Rev. Steven Meadows officiating. Burial will follow in the Heavener Cemetery in Buckhannon.  In lieu of flowers, any donations or contributions can be made to the Buckhannon Lions Club or your local Lions Club in remembrance of Bill.  The family requests cards instead of online condolences. Poling-St. Clair Funeral Home is in charge of the arrangements.