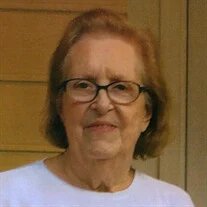 Please share a memory of Oleta to include in a keepsake book for family and friends.
View Tribute Book

Oleta was born in Lantz, West Virginia. A loving wife, she traveled alongside her late husband throughout his military career which brought them to Augusta, GA. A dedicated mother, she raised a family that flourished, bringing her joy. Throughout her life, nothing brought her more happiness than her Children, Grandchildren, and in recent years, Great Grandchildren.

Graveside Service will be held 10:30 AM Saturday, April 23, 2022 at the Mt. Union Cemetery with Pastor Ed Lowther officiating. Online condolences may be made to the family at www.polingstclair.com. Poling-St. Clair Funeral Home is in charge of the arrangements.

Share Your Memory of
Oleta
Upload Your Memory View All Memories
Be the first to upload a memory!
Share A Memory
Plant a Tree