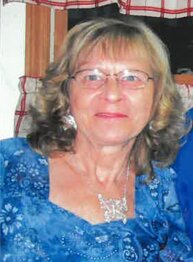 Please share a memory of Inis to include in a keepsake book for family and friends.
View Tribute Book

Inis Louise Simons Evans, was welcomed home to the loving arms of God on March 28, 2022. She awakened to this life on July 1, 1953, as the daughter of the late Cecil James Simons and Clara Jane Robinson Simons. She was raised by the late Hazel and Harold George. She leaves behind her loving husband of 48 years, Gary Wayne Evans; one son, Jeromy Wayne Evans and wife Jamie Phillips of Buckhannon, WV and one stepdaughter, Delana Evans and husband Quinton Golden of Buckhannon; three siblings, Anna Ruth Simons and husband Jim Lewis of Buckhannon, “Jim” Simons and wife Yvonne of Catawba, VA and Cecil Junior “J.R.” Simons of NC; several half brothers and sisters. Her loving legacy also left four grandchildren, Kaitlyn, Emily, Willow and Elijah Evans all of Buckhannon; also, two step grandchildren, Cody and Cade Garrett of Buckhannon and several nieces and nephews. Inis graduated in 1971 from Buckhannon Upshur High School. She attended West Virginia Wesleyan College. While there, she worked as a library assistant and was a member of the Alpha Beta Khi, an honorary business sorority. She sang in the college choir. In the summers she worked as a secretary at the West Virginia Wildlife Center. After graduation she was employed at Wesleyan in the admissions office as the first computer technician. Inis was always in church. She taught Sunday School, vacation Bible School, as a teacher/director, and helped organize and serve at the first annual ramp dinner served by the Heaston Church at Hodgesville, that continued for 17 years, with over 1000 people in attendance at each dinner, all for God’s glory. In the 1970’s Inis joined the staff of Buckhannon Upshur Middle School as the first library assistant there. In a short time, she became a teacher there, teaching the first keyboarding classes. She also taught learning disability classes. Eventually, sudden medical issues forced her to a wheelchair and early retirement. Still, she struggled to continue as a substitute teacher. She would read to students in classes at Union District Elementary School and help with book fairs. When leaving home became impossible, she still struggled through the pain to give of herself to others. She became the first teacher in Upshur County and the few in West Virginia to teach home school students. For 34 years, Inis physically suffered as a result of several purposeful actions directed by others. During all that time, her faith in God never faltered or was shaken. She never ceased praying for those whose actions had caused her continual suffering. For the last 4 years she has battled cancer. Her battle took her to Houston, Texas and 15 flights to Boston, Massachusetts. She was able to create the first free flights to and from West Virginia for medical patients and families. Patient airlift services (pals) now flies people with medical needs to almost anywhere (including Buckhannon). Veterans in particular. Her condition has brought major cancer treatments to West Virginia University. Because of her, coordination of Boston with WVU has offered life saving treatments never offered here before. Inis always said, “if my suffering saves one life, then it is all worth it”. Her suffering has already saved countless lives. She always prayed that through it all, her life would be a witness to God’s glory. It was!! On March 28, 2022, her battle-weary body gave out, but the” echoes of God’s glory” she showed through her faith and actions, not just words have proclaimed the message God has taught, through her. Our prayers are for that message to be reverberated in the hearts and lives of all those who know God and in the hearts of all who need to. Submitted for God’s Glory in Christ’s Name and Inis’s Memorial.   –Amen. Friends will be received Wednesday, April 6, 2022, from 6-8 PM at the Poling-St. Clair Funeral Home. A funeral service will be held 2 PM Thursday at the funeral home with the Rev. Mary Ellen Finegan officiating. Burial will follow in the Heavner Cemetery in Buckhannon. Online condolences may be made to the family at www.polingstclair.com. Poling-St. Clair Funeral Home is in charge of the arrangements.

Share Your Memory of
Inis
Upload Your Memory View All Memories
Be the first to upload a memory!
Share A Memory
Plant a Tree