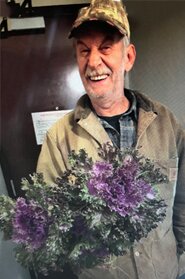 Please share a memory of Carl to include in a keepsake book for family and friends.
View Tribute Book

Carl Edward Russell, age 64, of Buckhannon, WV, died Saturday, March 19, 2022, at J. W. Ruby Memorial Hospital in Morgantown, WV. He was born April 17, 1957, in Buckhannon, a son of Marylena Juanita Elmer Russell of French Creek, WV and the late Harold Cleveland Russell. In addition to his mother he is survived by one son, Christopher William Russell of Buckhannon; two daughters, Alice Russell of Ashland, KY and Clarissa Russell of Buckhannon; one grandson, Christopher Harold Russell; three sisters, Nancy Bassford and husband George of Buckhannon, Linda Perrine and husband Ed of Weston, WV and Jennifer White and husband James of French Creek; five brothers, Robert Russell and wife Thanh of Crownsville, MD, Vernon Russell and wife Sharon of West Union, WV, Larry Russell and wife Virginia, David Russell and wife Brenda and Matt Russell all of French Creek and several aunts, uncles, nieces, nephews and cousins. In addition to his father, he was preceded in death by his sister, Karen Hosaflook. Mr. Russell was a rig worker in the oil and gas industry. In honoring his wishes, Mr. Russell will be cremated. Friends will be received Saturday, March 26, 2022, from 10 AM to 11 AM for a memorial gathering at the Poling-St. Clair Funeral Home. A memorial service will be held 11 AM at the funeral home with Larry Russell officiating. In lieu of flowers, donations may be made to the funeral home to assist with funeral expenses. Online condolences may be made to the family at www.polingstclair.com. Poling-St. Clair Funeral Home is in charge of the arrangements.