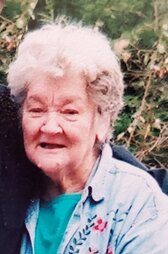 Goldie Dean, age 89, of Buckhannon, WV, died Wednesday, January 12, 2022, at Crestview Manor in Jane Lew, WV. She was born February 27, 1932, in Gilmer Co., WV, a daughter of the late Oliver and Dorthy Neal. In addition to her parents, she was preceded in death by three daughters, Frances Tenney, Dorthy Sue Daniels and Joyce Neal; two brothers, Orval and Martin Neal and three sisters, Dora Neal, Virginia Giliman and Ethel Dix. She is survived by five daughters, Rita Lowther, Sandra Wamsley and Betsy George all of Buckhannon and Barbara Neal of India and Patricia Heater of Elkins, WV; one son, Joseph Neal of Buckhannon and close friend, Cathy Bonner of French Creek, WV. Friends will be received Tuesday, January 18, 2022, from 12 noon to 1 PM at the Poling-St. Clair Funeral Home. Burial will follow in the Boilon Cemetery in Linn, WV. Online condolences may be made to the family at www.polingstclair.com. Poling-St. Clair Funeral Home is in charge of the arrangements.

Share Your Memory of
**Goldie
Upload Your Memory View All Memories
Be the first to upload a memory!
Share A Memory
Plant a Tree