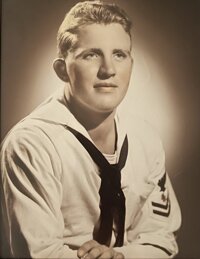 Exil Light, age 92, of Buckhannon, WV, died Thursday, December 16, 2021, at the Braxton Health Care Center in Sutton, WV. He was born December 6, 1929, in Hemlock, WV, a son of the late Dewey Robert and Flossie Tenney Light. On February 14, 1954, he married Nelda Gray Evans who survives. Also surviving are three daughters, Terry Morris and husband Jim and Debbie Light all of Buckhannon and Louise Laign and husband David of Greenwood, SC; three sons, Randall Light and wife Darline of Madison, WV, Mike Light and wife Cheryl of Buckhannon and Robbie Light and wife Becky of Hewett, WV; thirteen grandchildren; ten great-grandchildren; one sister, Connie Light of FL and one brother, Delmar Light of Buckhannon. In addition to his parents, he was preceded in death by three sisters, Agatha Hoover, Mavis Woody and Mona Light and one brother, Lancel Light. Mr. Light served in the U.S. Navy during the Korean War. He was a coal miner for King Knob Coal Company and then owned and operated Elkmar Mining and Supplies. Mr. Light was a member of the V.F.W. in Philippi, WV and was a member of the Good Hope Tabernacle in Buckhannon. In honoring Mr. Light’s wishes, he will be cremated. Graveside service 11 AM Saturday, May 14, 2022 at Upshur County Memorial Park in Buckhannon with Pastor Holly J. Hoover officiating. Online condolences may be made to the family at www.polingstclair.com. Poling-St. Clair Funeral Home is in charge of the arrangements.

A Memorial Tree was planted for **Exil
We are deeply sorry for your loss ~ the staff at Poling - St. Clair Funeral Home & Crematory
Join in honoring their life - plant a memorial tree

Share Your Memory of
**Exil
Upload Your Memory View All Memories
Be the first to upload a memory!
Share A Memory
Plant a Tree