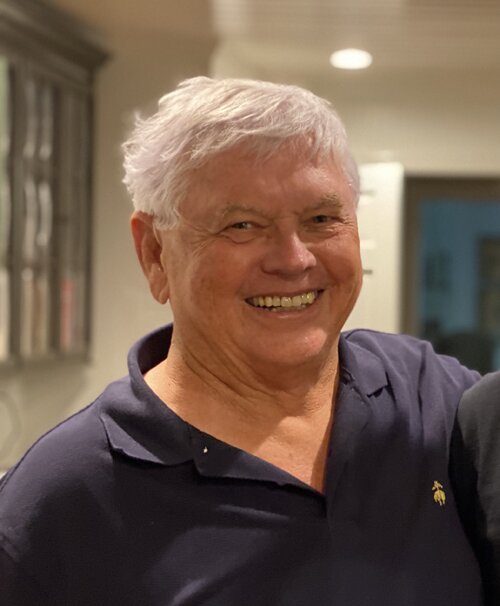 Larry Kirk Loudin, passed peacefully with his loving wife by his side after a brief illness on September 22, 2021. He was born in his family’s funeral home in Ireland, WV, to Paul Hilary Loudin and Marjorie Louise Bean on December 3, 1945. His parents divorced when he was a child and he moved with his mother and siblings to Tucson, Arizona.  Larry adored his older brother and sister, Keith Loudin and Jo Loudin Sparkman and told stories of their many adventures in the desert. Larry moved back to West Virginia to attend Walkersville High School where he met the love of his life, Barbara Martin. He was drafted to the Vietnam war, where he served in 281st Airborne division as a helicopter crew chief. While he was in the service and Barbara was enrolled WVU, they maintained their long-distance courtship. They married on a cold winter day on December 27, 1969, and have been keeping each other warm ever since. Since he was unable to pursue his true passion of Indiana Jones-style treasure hunting, he went to work at Corhart Refractory in Buckhannon, where he was employed for 30 years, while his wife was employed by WVU as an extension agent. Larry was incredibly proud of his wife’s career and accomplishments. He frequently bragged about her to anyone who would listen. He taught his children to know that a woman could do anything a man could do and was a feminist before it became a household word. Larry had a tireless work ethic and was able to fix anything. His house and garden were a source of envy to all who visited. He was a master woodworker and built custom furniture for his children and grandchildren. One of his favorite pastimes was buying nearly dead plants from Lowes and bringing them back to their glory in his garden. He loved searching for treasures at antique stores and estate sales with his daughter, Karen. He spent many hours fishing and boating with his son, Keith. He also loved helping Keith with his many home improvement projects and was immensely proud of all he was able to teach him. He was an amazing father-in-law to Karen’s husband, Garrett Hartley and Keith’s wife, Sara Anderson Loudin. He was quick to accept them into the Loudin fold, which included lots of unconditional love as well as unsolicited advice. Nothing made him happier than his role as a grandfather. He was lovingly called “Big L” by his four grandsons, Rhett, Carter, Theodore and George Hartley and granddaughter, Lane Loudin. He was incredibly proud of all their achievements, strengths and unique personalities. Larry loved life and never knew a stranger.  He was quick to make conversation with anyone and everyone. He could often be found walking around his neighborhood chatting with his neighbors and discussing politics or visiting with friends at First United Methodist church. He lived life with a twinkle in his eye and a wicked sense of humor. He was infinitely patient, incredibly kind and was quick to help anyone who needed him. He was a lifelong learner and was well informed on a variety of subjects. He was happy to tell you when you were wrong or apologize when he was. He lived life to the fullest and was often known to order dessert as an appetizer. In addition to his family, Larry loved anything with coconut, the music of Motown, going to the movies, Mexican food and honing his shrewd negotiating skills with anyone looking to sell anything. He despised professional sports, tardiness, making excuses, Donald Trump and going to the dentist. He was preceded in death by an infant son, his parents Paul Hilary Loudin and Louise Loudin, Marjorie Bean and H.G. Smiley, his brother, Keith Loudin and sister, Jo Loudin Sparkman. In addition to his immediate family, he is survived by sister, Pam Loudin Hall, Tammy Smiley, Diana Kelly Hess and brother, David Loudin. Maya Angelou said, you might forget what a person said, but you never forget the way a person makes you feel, and everyone felt love and acceptance in his presence. If you had the pleasure of knowing him, you were luckier for it. Larry lived life with a childlike wonder and enthusiasm for Christmas and was known to wear a velvet Santa hat during the holiday season. He was always excited to find the perfect gift and he was thrilled surprise his children and grandchildren. Private services will be held for the family. In lieu of flowers, please make a donation to Toys for Tots, or the Upshur County Parish House Christmas fund to help bring cheer to children in need for Christmas. Online condolences may be made to the family at www.polingstclair.com. Poling-St. Clair Funeral Home is in charge of the arrangements.

A Memorial Tree was planted for Larry
We are deeply sorry for your loss ~ the staff at Poling - St. Clair Funeral Home & Crematory
Join in honoring their life - plant a memorial tree