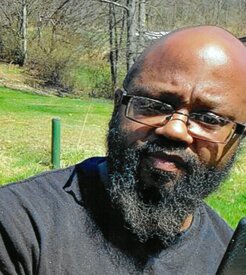 Joshua “Tiny” Dryden, age 44, of Buckhannon, WV, died Sunday, September 12, 2021, at his home. He was born May 3, 1977, a son of the late Edward and Brenda Johnson Dryden. On October 8, 2006, he married Melinda Santiago Dryden who survives. Also surviving are ten children, Tionne Dryden of Wilmington, Malachi Singletary of OH, Devante Santiago of Buckhannon, Andrea Grinnage of Wilmington, DE, Kenneth Jackson of Salem, WV, Isaiah Singletary of Wilmington, Khalil Jackson of Buckhannon, Ma’ya Singletary of Wilmington, Joshlynn Dryden of New Castle, DE, and Jayden Dryden of New Castle; seven grandchildren, Skylar Holmes, Jerimiah Santiago, Baylee McCoy, Kenneth Jackson, Jr., Marcus McManus, Arden Jackson and Brazille McCoy; several sisters and brothers; special friends, Spiffy, Donald and Gillum and beloved dogs, Bolo, Ruckus, Cardi, Magic, Rodney, Gracie and Gizzmo. Mr. Dryden was a Methodist by faith. Known lovingly around town as Tiny, he was anything but, he was passionate about fitness and enjoyed working out. Tiny was the owner and operator of Black Mountain Kennels (BMK). When he was not working with his dogs, he enjoyed buying cars from auctions and restoring them, especially Cadillacs and Lincolns. He was a constant learner, enjoying historical shows on the History Channel, and was very political. An avid football fan, he loved to cheer on his favorite team, the Saints. Tiny was very dependable and was always there for his family and enjoyed spending time with his loved ones. Friends will be received Monday, September 20, 2021, from 11 AM to 1 PM at the Poling-St. Clair Funeral Home. A funeral service will be held 1 PM at the funeral home with Pastor Ed Lowther officiating. In honoring Mr. Dryden’s wishes, he will be cremated following the services. Online condolences may be made to the family at www.polingstclair.com. Poling-St. Clair Funeral Home is in charge of the arrangements.

Share Your Memory of
Joshua
Upload Your Memory View All Memories
Be the first to upload a memory!
Share A Memory
Plant a Tree