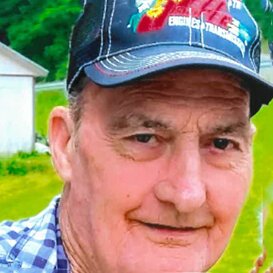 Please share a memory of Donald to include in a keepsake book for family and friends.
View Tribute Book

Donald Nelson Friend, age 79, of Buckhannon, WV, died Monday, September 6, 2021, at Uniontown Hospital in Uniontown, PA. He was born February 6, 1942, in Eden, WV, a son of the late Ruben Jackson and Melba Fern Lee Friend. On November 15, 1963, he married Betty Chidester Friend who survives. Also surviving are three daughters, Melba Jane Osburn and husband Gary and Vanessa Osburn and husband Wilson all of Buckhannon and Zoe Lacy and husband Carlton of Amherst, VA; six grandchildren, fifteen great-grandchildren and three great-great-grandchildren; two brothers, Ruben Eli Friend of Arlington, WV and Daniel Friend and wife Eve of Rock Cave, WV; one sister, Carol Friend of Clarksburg, WV; one sister-in-law, Jessie Friend of Rock Cave; his little buddy, Ryland Beccaloni and several nieces and nephews. In addition to his parents, he was preceded in death by three brothers, Calvin, Henry, and William “Coy” Friend and one sister, Almetta Andrews. Mr. Friend was an operator at a sawmill and a Methodist by Faith. He loved fishing, hunting and being outdoors. He loved the Pittsburgh Steelers. Private services and burial will be held for the family. Online condolences may be made to the family at www.polingst.clair.com. Poling-St. Clair Funeral Home is in charge of the arrangements.

A Memorial Tree was planted for Donald
We are deeply sorry for your loss ~ the staff at Poling - St. Clair Funeral Home & Crematory
Join in honoring their life - plant a memorial tree
Online Memory & Photo Sharing Event
Online Event
About this Event

Share Your Memory of
Donald
Upload Your Memory View All Memories
Be the first to upload a memory!
Share A Memory
Plant a Tree