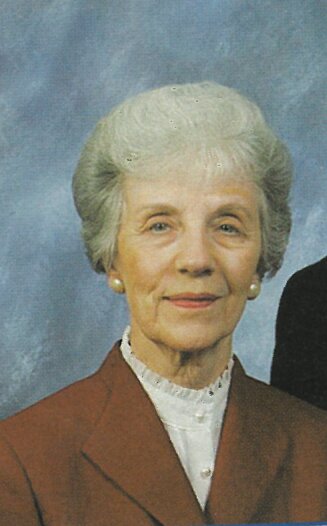 Please share a memory of Bernice to include in a keepsake book for family and friends.
View Tribute Book

Bernice K. (Layne) Corley, age 97, of Buckhannon, WV, passed away peacefully on Sunday, September 5, 2021. She was born September 2, 1924, in Monongah, WV a daughter of the late Harry and Edna Shroyer Layne. She married Montford S. Corley who preceded her in death on March 13, 2017. In addition to her parents and husband she was also preceded in death by five brothers, Jack, Donald, Gene, Lawrence and Jerry Layne and two sisters, Hellen Jarrett and Winifred “Peg” Simmons. She is survived by two sons, David A. Corley and wife Diane of Buckhannon and Joe Corley and wife Joanne of Richmond, VA; two grandsons, Drew Corley and wife Bethany of Wake Forest, NC and Chris Corley and wife Erin of Cincinnati, OH; two great-grandsons, Joss Corley of Cincinnati and Emmett Corley of Wake Forest; one great-granddaughter, Anne Corley of Wake Forest; two brothers, Bernard Layne and wife Ruth and George Layne and several nieces and nephews. Mrs. Corley lived in Richmond, VA for 31 years, was a homemaker and a member of the Chamberlayne Heights United Methodist Church in Richmond. During WWII, Bernice was a Rosie the Riveter who worked on and inspected airplane parts. When she returned to Buckhannon, she made her home with David and his wife Diane and enjoyed being with her grandchildren, nieces and nephews and also her late grand dog Lucy. Friends will be received Thursday, September 9, 2021, from 5PM to 7PM at the Poling-St. Clair Funeral Home. A private graveside service will be held for the family Friday with Rev. John C. Valentine officiating. The family respectfully requests that all those attending the visiting hours please wear a mask. If you do not have a mask, one will be provided to you. Online condolences may be made to the family at www.polingstclair.com. Poling-St. Clair Funeral Home is in charge of the arrangements.

Share Your Memory of
Bernice
Upload Your Memory View All Memories
Be the first to upload a memory!
Share A Memory
Plant a Tree