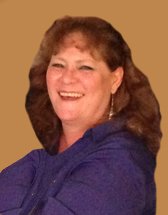 Pamela Dawn Branson, age 61, of Buckhannon, WV died Friday, September 11, 2020 at J.W. Ruby Memorial Hospital in Morgantown, WV. She was born January 5, 1959, in Salem, WV, a daughter of Mildred Blankenship Bleyer of Salem and the late Gilbert Earl Bleyer. On May 16, 1990, she married William Mark Branson who survives. Also surviving are two daughters, Audra Nicole McKinney of Salem and Leah Dawnn Branson of Buckhannon; four grandchildren, Gabriel, Emmanuel, Joel and Abby and one sister, Diana Wilfong and husband Ronnie of Moundsville, WV. In addition to her father she was preceded in death by her brother, Dennis Bleyer. Mrs. Branson was a homemaker. In honoring Mrs. Branson’s wishes, she will be cremated. In lieu of flowers contributions may be made to the funeral home to help with expenses. Online condolences may be made to the family at www.polingstclair.com. Poling-St. Clair Funeral Home is in charge of the arrangements.

Share Your Memory of
Pamela
Upload Your Memory View All Memories
Be the first to upload a memory!
Share A Memory
Plant a Tree