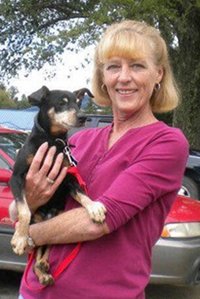 Brenda Jane Leigh, age 59, of Weston, WV, died Monday, September 30, 2019, at the Stonewall Jackson Memorial Hospital in Weston. She was born November 15, 1959, in Beckley, WV, a daughter of Guy Pointer of Macon, GA and the late Mary Skeens Spencer. On March 20, 2006, she married Robert Leigh who survives. In addition to her father and husband she is survived by one son, Brent Garrett and wife Anne of Fernandina Beach, FL; one grandson, Oliver Garrett of Fernandina Beach; one granddaughter, Zoe Garrett of Fernandina Beach; one sister, Kathy Cunningham of Winfield, WV; two brothers, Dennie Pointer and wife Linda and Stevie Pointer all of Sanford, NC and special family, Betty Walls of Dunbar, WV. In addition to her mother, she was preceded in death by her stepfather, Jack Spencer. Mrs. Leigh was a volunteer at the Lewis Upshur Animal Shelter in Buckhannon and was an avid animal rescuer. She dedicated the last few years of her life to rescuing animals. Mrs. Leigh was an Educator and a Christian by faith. In honoring Mrs. Leigh’s wishes she will be cremated. Online condolences may be made to the family at www.polingstclair.com. Poling-St. Clair Funeral Home is in charge of the arrangements.

Share Your Memory of
Brenda
Upload Your Memory View All Memories
Be the first to upload a memory!