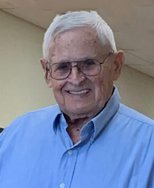 Harold E. Cobb, age 89, of Buckhannon, WV, died Friday, September 27, 2019 at the WV Veterans Nursing Facility in Clarksburg, WV. He was born December 2, 1929, in Kanawha County, WV, a son of the late Charles and Merlie Miller Cobb. On September 22, 1956 he married Juanita Ruth Walker who preceded him in death on June 7, 2010. In addition to his parents and wife he was preceded in death by two brothers, Everett and Charles Cobb. He is survived by two daughters, Deborah McGlumphy-Anderson and husband Ed of Fairmont, WV and Bobbie Randolph and husband Will of Coxs Mills, WV; three grandsons, Nick McGlumphy of Fairmont, Craig Randolph of Glenville, WV and Eddie Anderson and wife Jes of Uniontown, PA; three granddaughters, Resa Morgan and husband Matthew of Fairmont, Christy Parker and husband Walt of West Deptford, NJ and Heather Mozes of Canton, MI; three great-granddaughters, JoElla Mozes of Canton, Addaly Minnie of Glenville and Lexie Nastazi of Gibbstown, NJ; three great-grandsons, Henry Anderson of Uniontown and Ryan and Chase Parker both of West Deptford; one sister, Ella Jane High of Eustace, TX and several nieces and nephews. Mr. Cobb served in the U.S. Navy during the Korean and Vietnam Wars. He retired as a Sgt. for the WV Department of Natural Resources and was a Hunter’s Safety Instructor at Camp Caesar for several years. Mr. Cobb was an avid outdoorsman. He was a member of the Stonecoal Lake Fishing Club and the Upshur County Beagle Club and a member of The Way of Holiness Church. He served as Chairman of the Board for nearly 25 years and loved his church and his church family. Friends will be received Tuesday, October 1, 2019 from 6-8 PM at The Way of Holiness Church. A funeral service will be held 11 AM Wednesday at the church with Pastor Jerry Murrell officiating. Burial will follow in the Heavner Cemetery in Buckhannon. The West Virginia Department of Natural Resources will provide honors and the Upshur County Honor Guard will provide military honors at the graveside. Online condolences may be made to the family at www.polingstclair.com. Poling-St. Clair Funeral Home is in charge of the arrangements.

Share Your Memory of
Harold
Upload Your Memory View All Memories
Be the first to upload a memory!