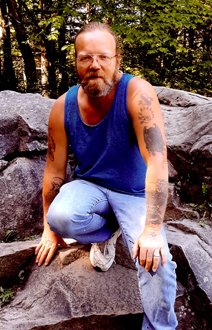 Roy Walter Mackey, age 47, of Buckhannon, WV, died Thursday, September 19, 2019, at the United Hospital Center in Bridgeport, WV. He was born October 18, 1971 in Buckhannon, a son of the late Charles and Rita Shipman Mackey. On October 22, 2016 he married Dawna Mackey who survives. Also, surviving are four sons, Miguel Mackey of Elkins, WV, Roy Mackey of Buckhannon; Todd Gilkeson of CO and Tristen Tenney of Huntington, WV; two daughters, Shayla Dean and Kayla Tenney both Buckhannon ; two grandsons, Ezra Mackey of Buckhannon and Zeller Mackey of AZ; one granddaughter, Emery Courtney of Buckhannon; two brothers, Charles Mackey and wife Lois and Tom Mackey and companion Crystal Price all of Buckhannon; one sister, Judy Hancock of NC; special niece, Theresa Mackey of Buckhannon and several nieces and nephews. In addition to his parents, he was preceded in death by one sister, Mary Hanifan. Mr. Mackey was a member of the Living Word Church of God in Buckhannon. He was an expert stone mason and loved to go camping. Friends will be received Wednesday, September 25, 2019 from 2-7 PM at the Living Word Church of God. A funeral service will be held 7 PM at the church with Doug Spears officiating. In honoring Mr. Mackey’s wishes he will be cremate following the services. In lieu of flowers donations may be made to the funeral home to help with funeral expenses. Online condolences may be made to the family at www.polingstclair.com. Poling-St. Clair Funeral Home is in charge of the arrangements.

Share Your Memory of
Roy
Upload Your Memory View All Memories
Be the first to upload a memory!