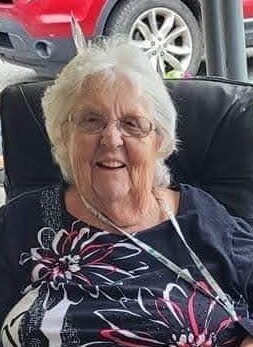 Please share a memory of Joan to include in a keepsake book for family and friends.
View Tribute Book

Joan V. “Nanny” Phillips, age 92, of Buckhannon, WV, died Sunday, January 9, 2022, at St. Joseph’s Hospital in Buckhannon. She was born June 2, 1929, in Ecorse, MI, a daughter of the late Steward and Viola Wohlfeil McPherson. On May 27, 1950, she married Guy Phillips who preceded her in death on May 3, 2006. In addition to her parents and husband, she was preceded in death by one son, Michael Phillips and one sister, Jean Thornton. She is survived by three sons, Richard Phillips and fiance Sheri Higgins of Fremont, MI, Daniel Phillips and wife Janet and Craig Phillips and wife Linda all of Buckhannon; seven grandchildren; eleven great-grandchildren; ten great-great-grandchildren; one sister, Betty Isreal of Fremont and caregiver, Mary Miller of Philippi, WV. Mrs. Phillips was a homemaker , attended Bethany Baptist Church and loved to play Bingo. Friends will be received Thursday, January 13, 2022, from 11 AM until 2 PM at the Poling-St. Clair Funeral Home. A funeral service will be held 2 PM Thursday at the funeral home with the Rev. Gary Phillips officiating. Burial will follow in the Sand Run Baptist Cemetery in Excelsior, WV. In lieu of flowers donations may be made to the Salvation Army of Buckhannon in memory of Mrs. Phillips. Online condolences may be made to the family at www.polingstclair.com. Poling-St. Clair Funeral Home is in charge of the arrangements.

Share Your Memory of
Joan
Upload Your Memory View All Memories
Be the first to upload a memory!
Share A Memory
Plant a Tree