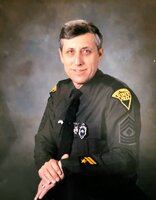 Robert Ray Alkire, 75, of Buckeye, WV, passed away Sunday, March 27, 2022, after an extended illness.  Born September 28, 1946, in Buckhannon, WV, Bob was the son of Winfred C. and Areta Aegan Alkire.  He was preceded in death by his parents and brother, William Alkire.

Bob graduated from Buckhannon Upshur High School in 1964, served in the US Navy (1964-67) and attended WVU before becoming a WV State Trooper in 1973, retiring as 1st Sergeant/District Commander Second District Company “C” in 1994.  While serving as a Trooper, Bob also worked with the DEA.  He served as Sheriff of Pocahontas County from 2000-2008.

Bob was an avid woodworker and bowler.  He loved spending time with his sons and grandchildren and watching WVU football and basketball games.

Friends may be received Thursday, March 31, 2022, from 4 PM to 8 PM at the Poling-St. Clair Funeral Home in Buckhannon. A funeral service will be held Friday, April 1, 2022, at 1 PM at the funeral home with Pastor Ed Lowther officiating. Burial will follow in the Heavner Cemetery in Buckhannon. The West Virginia State Police will perform Honors at the gravesite. Online condolences may be made to the family at www.polingstclair.com. Poling-St. Clair Funeral Home is in charge of the arrangements.