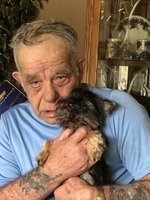 George A. Kowalkoski, age 68, of Buckhannon, WV, died Wednesday, August 11, 2021, at his home. He was born October 13, 1952, in Upshur County, WV, a son of the late George Anton Kowalkoski and Pauline Morrison-Campbell. On February 14, 2016, he married Sandra Sponaugle who survives of Buckhannon. Also surviving are, two sons, Phillip and Robert Kowalkoski both of Buckhannon; one daughter, Veronica Peters of Grafton, WV; three step-daughters, Cynthia Betler and husband Eric of Helvetia, WV, Samantha Sponaugle and Jamie Farnsworth and partner James Smith all of Buckhannon; five step-sons, Ricky Farnsworth, Rusty Farnsworth and wife Whitney, Ryan Farnsworth and Rodney Farnsworth and wife Lexe all of Buckhannon and Richard Farnsworth and wife Becky of Philippi, WV; several grandchildren; one sister, Barbara Fisher and husband Jim of Buckhannon; several nieces and nephews and his beloved dog, Misty. In addition to his parents, he was preceded in death by his brother, Michael Kowalkoski. Mr. Kowalkoski was a truck driver who loved to hunt and fish. He was a jokester who enjoyed making everyone laugh. In honoring Mr. Kowalkoski’s wishes, he will be cremated. Online condolences may be made to the family at www.polingstclair.com. Poling-St. Clair Funeral Home is in charge of the arrangements.